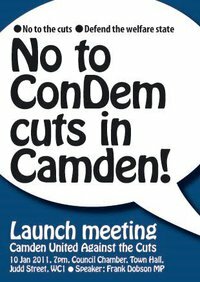 Labour councillors elected in May 2010 and 2011 are in the unenviable position of being pushed in two opposing directions at once.  Elected to resist cuts, yet we have to implement them.  Moreover, the sheer length of the Coalition’s economic cuts programme – six years, more than one full term of local government - also means that we also have to develop new plans within this electoral cycle, risking the appearance of political ownership of the Government’s squeeze on services.

Do we resist now?  How long do we resist for? What of the limited powers do we have, outside of demonstration, if non-implementation is not an option? What does ‘fighting’ the government actually mean?  What does history tell us?  In the face of the Tory capture of the economic argument over legacy just how long will the ‘no to cuts’ narrative run until it dries up?

Worst of all, does a ’1980s stance’ not carry with it bigger and more unavoidable risks for the future of local public services?  The central dilemma for decision makers is how far we can actually resist unfair and frontloaded central government cuts without jeopardising the respected history we have in delivering high-quality, universal services to one of the most socially polarised boroughs in the country.

While there has been fierce and principled opposition to cuts locally, Labour has not been – and is not – the ‘no cuts, no change party’ in public services.  There is also a broad body of moderate opinion among residents that spending has to be contained to deal with the national financial situation.

Labour’s national budget plans factored in the need to shrink spending.  Our argument (proved right by flatlining growth figures) was that the Tory cuts to revenue and capital infrastructure spending run too deep and too fast.  In particular, that slashing capital spending on major infrastructure works would have an unnecessarily harsh impact on jobs and growth.

The Coalition Government project of the ‘creative destruction’ of public services has to be resisted. The radical changes to welfare, the NHS, schools and local government also need to be addressed.  Ignoring education changes as public land (and value) is asset-stripped for ‘free schools’ would be unforgivable.  Do we entrust the commissioning of health services to GPs? Do we seek to engage with them, as a council, to ensure that change happens with the consent and involvement of the community?  Do we not seek to reorder services to save the best of Labour’s legacy, for example helping working parents by cushioning early years and childcare?

Most importantly, and perhaps somewhat controversially for some former Ministers, there is a case for Labour’s damaged economic record to be repaired where we are in power – in local government. This is the place where we make tough financial decisions but maintain our belief in the role of the state as a provider of universal services and a key driver of growth and economic policy.

Here’s what we have started in Camden.

Made £23m administrative savings out of a year 1 £35m cuts pressure. Administrative posts have been cut by up to 40% in some departments.  More services have been brought online to reduce internal costs between departments and the communications budget has been reduced by over 25%.

Reduced senior officer costs and numbers. Camden senior pay will be negotiated down to reflect everyone rowing together against the cuts.  Reward packages will be reduced by 17%.  The number of senior officers will also be reduced in the short term, with further plans to bring this down by ‘delayering’ management.  In all the council will reduce its payroll by 1000 staff in the next 3 years.

Set a 3 year budget strategy. When most councils had only stuck (publicly at least) to one or two year plans.  This enables us to better plan savings, and at least cushioning the blow on service users in those services we have to close – e.g. new arrangements for play service coming in 2012, not April 2011.

Created a Camden People’s Fund to ease transition of services de-commissioned and cut. Money from in-year underspends to ease further ease the transition of some services, and already being used to help Netherwood Older People’s Centre develop new business models.

Revealed all payment to suppliers over £500. Now standard practice, in July 2010 Camden was one of the first (and largest) councils in the country to show what we spend, online.  Residents can see how much money we spend on suppliers and challenge us on value for money.

Published Chief Officer Pay and reward schemes for the first time. Unlike the former Tory-Lib dem administration, which refused to do so, senior officer pay has been put online, so every citizen can see the pay and reward of Camden’s top public servants.

FOCUS ON SCHOOLS AND EARLY YEARS:

Protected children’s services from the brunt of the cuts. Camden’s £30m a year children’s services budget is the largest in London and funds many services few other councils provide.  While other departments had to cut budgets by up to 20% of more, children’s budgets were only reduced 10%.  Camden now retains a high number of children’s centres (15), compared to Conservative-run boroughs like Hammersmith and Fulham which have reduced theirs to 5.  These focus only on the poorest, while Camden still provides universal care.  Camden still funds a network of afterschool clubs and has retained 25hrs of free nursery care for 800 children, while most councils only provide the statutory minimum of 15 hours

Created the Community Investment Programme, by generating capital from the disposal of commercial properties we have created a £100m ‘Plan B’ to modernise our schools following the unfair decision by the new government to withdraw £250m Building Schools for the Future money in July 2010.  Camden schools will now be able to support at least some of their modernisation and repair plans through this cash injection from the sale and reinvestment of council assets.

Established the independent Camden Education Commission, chaired by Sir Mike Tomlinson, a radical move to plan how we save and nurture the best out of Camden’s schools in the face of massive government pressure to scrap LEAs and our community model of schools.

No library closures – Despite £2m cuts to the library service, Camden will retain one of the highest funded library services in London and will not close any of its 13 libraries.  After conducting the biggest library consultation exercise in Camden’s history, we also modernise the service to meet changing needs of Camden residents – and the challenges of change in content industries and digital exclusion.  Our Community Investment Programme and King’s Cross development will also mean the wholesale modernisation and rebuilding of two libraries and we will support a new community network of Friends groups to ensure more self-governance and a more representative voice for library users than before.

Ended the unpopular auctioning of council homes by the Tory Lib Dem administration which had resulted in public property being ‘flipped’ by private developers for huge profits.

Rejected Tory Lib Dem plans to introduce fixed-term council tenancies for our 28,000 council homes.  Unlike Tory boroughs, who want to undermine the principle of lifelong tenancies, Camden will retain this housing right.

INVESTING FOR THE FUTURE

Saved future capital costs by selling off old buildings and modernising services. £77m of taxpayers’ liability for future repair costs for old council buildings will be reduced and money saved through the building of a new administrative centre in the King’s Cross.  The new centre will mean that costly older buildings can be closed and sold, and more services digitised.

Making good the negotiations with private developers. We are securing wins from developers of King’s Cross, the largest brownfield development in western Europe, which we achieved in 2006 when negotiating King’s Cross.  By 2014 we will have built a new library and a new public swimming pool for the people of Camden.  The opening of the new University of the Arts will establish King’s Cross as a new hub for creative industry jobs, putting run-down Soho in the shade.  By 2020 the project will have created 25,000 new jobs.

In July Camden will be developing it’s next Medium Term Financial Strategy – a moment when Labour can look again at its approach to public services for the area, and the future of these services in the face of very heavy budgetary pressures.

Here are some big questions, we in local government will have to address in the coming years – and develop a Labour response to:

- How will Coalition Government plans to force council to outsource impact on what we do, and what residents expect us to do?  Can we retain the best aspect of an active public service model in the face of the Tory idea of ‘hands-off’ and ’sink or swim local government?

- Digitising services – crucial for the future of flexible, tailored services.  Can we eradicate digital exclusion in the borough and help people get the most out of a transformed ‘virtual council’?

- How do we get real savings out of shared services?  Our experience shows that sharing services with a small number of boroughs won’t bring in the anticipate savings compared to the potential disruption caused: much grander multi-borough/sub regional partnerships may do, however.  What does that mean for our workforce?  Can we maintain our public service ethos and resist the demand by the Coalition to outsource?

- Securing and celebrating wins from regeneration and really looking at the role of regeneration in achieving community benefits and our political aims – preserving Camden’s social mix.

To answer all of these questions there will need to be more of a shift in Labour thinking away from the comfort of outright opposition – from councillors, MPs, the party and our community activist base – away from the (often internal) opposition politics of the past and towards the consideration of more long-term, and strategic and realistic thinking on policy.

Cllr. Theo Blackwell is Cabinet member for Finance for London Borough of Camden.

One Response to 1980s resistance won’t save our services from cuts: Cllr Theo Blackwell