Pickles in no mood to listen to the North East: Cllr Iain Malcolm What local government can do for Labour: Sam Elliot 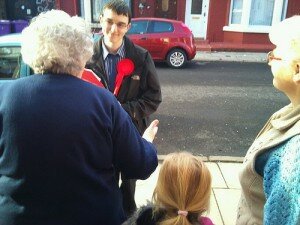 Jake on the doorstep

Its not an easy time to be young.

Tuition fees have been trebled. University places have been cut. The EMA has been slashed. There are dozens of applicants for every job, and fewer jobs every day. The numbers of 18 to 24 year olds looking for work grows every day. And its harder than ever to get a foot hold on the housing ladder.

It seemed right, therefore, to do what I could to make sure that young people were represented and had someone to fight their corner.

For those who do not know me, I’m Councillor Jake Morrison, elected to serve the ward of Wavertree on Liverpool City Council. I’m 18 years old.

I’m the youngest ever councillor to be elected to Liverpool City Council. My election win made an especially big impact because I defeated Lord Mike Storey – former Liverpool Council Leader and now a Lib Dem peer. On a night when the Lib Dems bore the brunt of people’s anger about the coalition’s cuts, Lord Storey’s defeat to an 18 year old seemed to sum it all up eerily well.

There are two ways to look at my election win. One is to say that I benefited from the political phenomenon which swept much of the country on 6 May – the utter decimation of the Liberal Democrats. That the tidal wave of anger against the Lib Dems, the sense of betrayal which resonated time after time on door steps, was big enough to knock out one of the all time great Liverpool City Councillors. 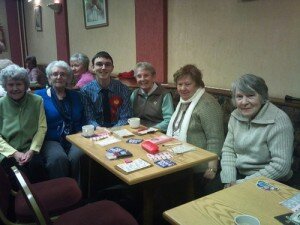 Jake at the bingo

But then there’s another way to look at the result. Throughout the election, my campaign wasn’t based on stuffing things through people’s letter boxes. It was based on making real connections with the communities that made up the ward. So, I spent time playing bingo with some of the residents. I went on walkabouts with the police and community support officers. I went to churches and youth clubs, and I met up with schools. And night after night, I walked up and down the streets knocking on doors and speaking to people.

As I did, something else emerged: these were people who had been taken for granted. ‘No-ones ever knocked on my door before’ was a refrain that came back as often as ‘I used to vote Lib Dem, but I won’t ever do it again’. And yet people had so much to say. They wanted someone to listen to their concerns about their jobs, about the NHS, about their public services and about their schools. The more I spoke to people, I began to realise something else: I was the only one listening.

It would be foolish of me to try and claim it was all down to me and my campaign. Of course it wasn’t – the wave of anger against the Lib Dems played a big part. But I think the way I ran my campaign played a big part as well. As the momentum built and as ‘vote Jake Morrison’ posters began to appear in front windows across the ward (I gave out over 400 posters to local residents during the election. I remember seeing just 4 posters for Mike Storey – and 3 of those were in the same window!), you got the sense that something remarkable was happening.

Since the election, I’ve had to juggle returning to my full time job as an NHS care assistant with taking up my councillor’s duties and casework – and also responding to a glut of media calls. As I have, I’ve begun to really enjoy being a councillor. Of course it’s a challenge. It’s long hours and hard work. But it is more than worthwhile. Three weeks after I was elected, we had the first meeting of the Full Council. The sense of pride I felt as I took my seat was immense – it made all of that effort worth it!

What does the future hold for me? Who knows! My priority now is simply to get my head down and get stuck into working hard for the people I was elected to serve and represent. The people of Wavertree Ward deserve someone who is going to fight for them every day. I know I can be that person – and I know I won’t let them down!