Pickles in no mood to listen to the North East: Cllr Iain Malcolm 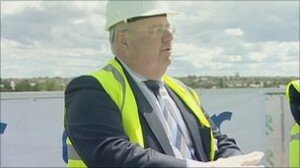 Eric Pickles visited the North East last week, the first time he has set foot in the region since taking up residence in Eland House.

A self-confessed political bruiser, Eric has been dubbed the worst Secretary of State, Local Government Secretary has had in recent history. He clearly relishes his hard man, no nonsense image and indeed he takes pride in advising the Chancellor that the Treasury’s proposed cuts to the local government financial settlement didn’t go far enough. So whilst other spending departments faced a 19% reduction over four years, those of us in the front line of local service delivery faced a 27% reduction over the same time period.

I fear that despite his jovial and good humoured manner in our private meetings, Eric is in no mood to compromise on his determination to reduce finance to local councils and the messianic fervour in which he spoke about the reform of the business rates should give all of us in local government real cause for concern.

South Tyneside was one of the hardest hit areas when the grant settlement was announced in December, we had the second highest funding loss within the north east region based upon head of population, with a 17% reduction in core government funding for 2011/12 and a further 10% in 2012/13, with most of the cuts being front loaded.

After praising my council for its innovative approach to service delivery (we have a successful strategic partnership with BT to deliver our back-office functions) Eric told the local media that he “fought hard” for the region, but I think he is being extremely disingenuous when you consider that South Tyneside lost £110 per head of population when the national average was only £49 and wealthy areas of the country like Maidenhead and Windsor lost just £5 per head of population.

Indeed if I had received the same per head level of funding reduction as the average nationally, I would have had an additional £9.5 million to spend next year not a budget deficit of £35m.

However Eric – like the rest of his colleagues in Government was in no mood listen to the North East.

But then this is a Government which has scrapped the popular Development Agency ONE North East and believes that the regional economy can be re-balanced by the advent of LEPs – although they have no cash and no real remit; a Government that believes in “localism” but insists on pressing ahead with the expensive and unpopular elected Police Commissioner concept, and a Government which tells us they want to give Councils a real meaningful role – but insists upon forcing the Mayoral system on our biggest Cities.

Cllr. Iain Malcolm is the Leader of South Tyneside Council