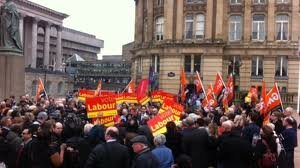 I suspect that 3 May 2012 will still be talked about in Birmingham Labour circles long after many of us have left the stage.  We needed just four seats to end nearly a decade of Tory/Lib Dem rule at the Council House.  By the end of the night we had bagged twenty.  Wards once thought to be Tory or Lib Dem strongholds are now represented by Labour Councillors.  Even the true blue bastion of Sutton Coldfield has fallen with Labour scoring a historic victory in the Vesey ward.

No one would deny that the national scene played an important part in Labour’s victory last week.  On the doorsteps the anger of Birmingham voters at the unfairness and incompetence of the Government was palpable.  As a city blighted by scandalously high levels of youth unemployment and struggling with the painful consequences of a double-dip recession, Birmingham knows all too well that we are not “all in this together”.

Yet the desire to punish the Government was only part of the picture.  We Brummies are a discerning lot and don’t just switch our votes on a whim. Birmingham Labour won so well on Thursday because we were able to give clear and compelling answers to the crucial questions of how we would be able to deliver a fairer, more equitable city in a harsh economic climate.

Unlike the two Coalition parties, who failed to issue even the loosest of policy statements, Birmingham Labour produced a comprehensive manifesto setting out a radical yet realistic vision for the city.  This was the product of an intensive process of policy development.  Policy Commissions made up of Labour Councillors, MPs and members, reached out beyond the party to shape new policy proposals in partnership with residents groups, voluntary organisations, academia and the business community.  These proposals were in turn subjected to a vigorous “value for money” test.  The result was a robust, radical manifesto focused on answering the key questions facing our city. How do we deliver more jobs?  How can we drive up educational standards? How do we close the gap between our richest and poorest neighbourhoods?  How can we put more power in the hands of local people and communities?

Our partnership approach to policymaking was mirrored by strong, community-based campaigning.  We have learned from our successful defence of parliamentary seats in the 2010 General Election when constituencies like Edgbaston, Northfield and Selly Oak “bucked the trend” and held back the Tory onslaught.  Three years ago these constituencies had virtually no Labour Councillors.  Intensive work by local campaigners; tackling grassroots concerns, building and renewing our links with community groups and working with, rather than talking at residents, has transformed the landscape.  These neighbourhoods now have more Labour than opposition councillors.

Sustaining a community-based approach to politics is essential now we are in office.  This isn’t just for narrow reasons of electoral advantage.   A city of a million people with a vast and diverse array of neighbourhoods and communities cannot be run on the old-fashioned “one size fits all” model.  Furthermore the savage cuts to budgets mean that we need an ongoing dialogue with local people about priorities and the shape of services if we are to do things in a fair and equitable manner.

Birmingham’s new Labour administration is already committed to a radical devolution of power, taking away powers from Cabinet Members at the centre and handing them to District Committees made up of local Councillors able to programme services and budgets in a way that better reflects local needs.  Key services like housing management, youth provision, community safety and street cleansing will no longer be delivered by central diktat but will be shaped by the requirements of the community they serve.

We will also draw on the lessons of the neighbourhood management and budgeting pilots taking place in the city to develop models that genuinely empower local communities and enable them to take greater control of their own destinies. In contrast to the Coalition’s feeble ‘Big Society’ we want to build a Birmingham of empowered neighbourhoods working in partnership with a Labour Council to deliver a safer, sustainable and more prosperous city.

It’s a big agenda and in this tough climate we know that it won’t be easy.  But I have every confidence that our 77-strong team of Labour Councillors, drawn from all walks of life and representing a diverse array of neighbourhoods, will rise to the challenge.  Birmingham used to be known as the best governed city in the world.  I hope that this time Labour’s legacy will be to make it the most empowered.